CrossTown Renegades
When the members of the CrossTown Renegades Band take the stage the listening crowd recognizes immediately there is something unique about them, an elusive quality that makes their performance "Lagniappe" or "a little more". They bring their collective history and love of the music with them and share it with every show. CrossTown Renegades has appeared in venues as large as Houston's Minute Maid Park, Intimate Club Venues, and everything in between.

Although the Founding members have changed from time to time Jerry Mantellini has kept his core focused on the best entertainers he could gather. All of the current members of the band came from touring bands at some point in their career and have always had that desire to return to the big stages. Jerry encourages them to contribute to the band's collective style, and it was only a matter of time before they were booked to the bigger clubs around the Greater Houston Area. Soon, they were they headlining many of the Great State of Texas' Rallies, Festivals and Rodeos and opening for some of the Nation's top Touring Acts, such as, The Georgia Satellites, Missy Covill and the Iron Cowgirl Band (of Sturgis rally fame), and at the Nation's largest Four Day Rally- The Lone Star Rally.

CrossTown Renegades has evolved into an undeniably unique, delightful Texas Sound that is all their own and not to be missed. 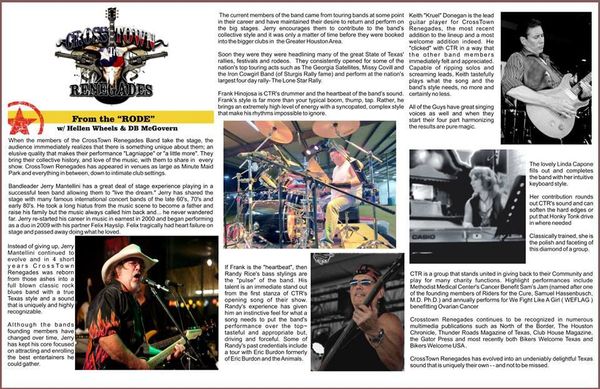 Thanks for visiting our press kit either on line or digital !

Favorite Concerts. We have years of experience between all of Our Members with

different Style in each one.

We hope you will consider Us for your Next Event or Show. Between Our Bands CrossTown Renegades and CTR Unplugged Acoustic, We have something for Everyone.

We believe once you hear the Unique Sound we have Collaborated

CTR or CTR Unplugged will be the Band For You !

So have a Look, Listen, and Hope to Hear From Y’all Soon !

Make sure to click the music Player at the bottom of the page on our web site. It shows all the styles of our music from Rock---Blues-- Our Country Side.


Thanks !  Hope to hear from you soon......
Jerry Mantellini/CTRBand

Sizzle Reel by Jim King,  King of the Road Show